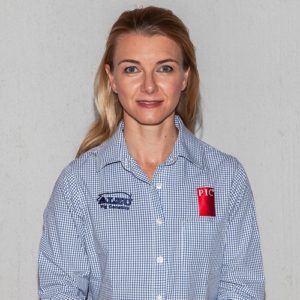 Alteli started her career in the South African pig industry in 2002. She holds in BSc degree and majored in Biochemisty and Physiology. Alteli started as a laboratory technician for PIC South Africa at the Gene Transfer Centre, where she was semen operator and distributor as well as Boar house and Laboratory manager and presented numerous pig artificial insemination courses. In 2006, Alteli joined the technical services and marketing team for PIC South Africa. Alteli relocated with her spouse, Mauritz, in 2015 where she was involved as Genetic Consultant at the PIC multiplier herd and GTC, Wangwa farms, in Zambia. She returned to South Africa in 2016 and is currently involved at PIC South Africa as Technical and Genetic Services manager.