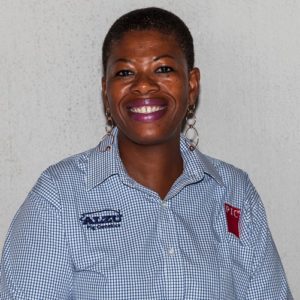 Sarah has a degree in BSc. Agric. Animal Production obtained from the University of the North. In 2006, Sarah joined ALZU enterprises as Slaughtering supervisor at the ALZU Turkey abattoir. She then moved over to ALZU egg section and then in 2008, joined the pig industry when she became Assistant Manager at ALZU Piggery. She then moved over to Kanhym Estates Piggery where she filled the role of Unit Manager until 2014. In 2015, she bacame Piggery Manager at Molare Piggery. Sarah was a student mentor and Training officer at Kanhym Estates of which one of her star students includes, Justice Motubatse.

In 2017, Sarah joined the winning team to fill the role of Technical Advisor to assist emerging farmers. Sarah is also of great value in farrowing house and AI training on PIC Royalty customers’ farms.